While browsing Facebook this week, I couldn’t help but notice the story about a missionary who was left stranded in Bryce Canyon. Originally shared and posted by LDS Living, it has sparked extreme controversy. That article was taken down within a few days of being public. Today they posted a sort of apology in light of the arguments that stemmed from it (You can read that article here).

Doing a quick google search of “Bryce Canyon missionary”, I found three articles on the topic, one of which has since been removed. One is an LDS website (though not run or sponsored directly by the church), and one is not. I’m actually delighted with this diversity, because we can address many issues and viewpoints.

I read the first article the day it came out. I actually really appreciated the format in which it was shared, considering the source. I loved that there was a positive focus on how the son overcame the trial and how the grandparents took the higher road and were loving and understanding. I felt that they weren’t necessarily brushing aside the fact that he was abandoned by his mother, but that they were more focusing on how it was overcome.

I also think that we must be careful about condemning others in a public setting. If you’ve read any other posts on my blog (particularly Why I Left) you’d understand that I came from a situation of parental abuse and knee-jerk reactions, where one was expected to keep up appearances at the expense of personal well-being and true happiness. So, I want you to know that in nowise do I agree with the mother’s behavior. I am and always will be quick to condemn detrimental behavior. However, in times like these, where our words can do nothing to solve the situation because we are not of immediate access, we should apply a very wise words of the Savior “He that is without sin among you, let him first cast a stone at her.” John 8:7

Looking back at the apology from LDS Living, you can easily see that this principle of refraining from judgement and condemnation was not practiced at all. It is one thing to bring to light the darkness in other people’s actions, and lovingly desire to help them return to the light through healing and love, and it is another to publicly crucify, humiliate, and utterly condemn someone for their actions, especially when you 1) aren’t the victim 2) you are not in a situation to lay down the law 3) You are not treating this woman as a daughter of God, and that is one of the most important commandments that we are given.

I completely and totally advocate against this mother’s behavior. Not because I think she is an absolute monster for what she did, but because I personally believe that this was not the most loving thing to do. Crises of faith should not be treated as a disease or something to be completely shocked or horrified by. There is such a stigma surrounding doubts. They are natural; they happen all the time, to all of us. Rather than having a knee-jerk reaction and abandoning the “problem”, I believe you should face it head on. You shouldn’t treat your child, spouse, family member, or friend like a leper simply because they aren’t on the same level of assurance as you are on now. In fact, most members who have had doubts leave simply because of the negativity everyone gave them for having natural human fallacies. They feel condemned, and their is some kind of ultimatum placed on them. Essentially, if they don’t come around to seeing things as we do now, they will forever be beneath us. No one likes feeling that we, and we need to stop making this church such a difficult environment for those who are struggling. Certainly, we should encourage them to not abandon their faith and to hold on to what they have known and not let “something you don’t fully understand unravel everything you do know.” (Quote taken from a talk given by Kevin W. Pearson Of the First Quorum of the Seventy, April 2015 General Conference. 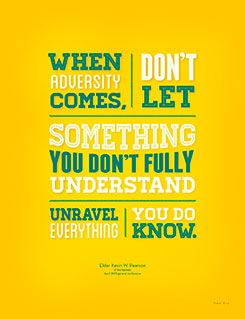 (Image can be found here)

We as a community, as an LDS family need to be there for one another through thick and thin, rain or shine. We need to “mourn with those that mourn” and stop telling them that we can’t be around them because they bring doubt into our own hearts. We need to have testimonies strong enough withstand that so that we can lift others in their time of need. We also need to learn to have the humility required to be the one in need. At some point in our lives, we will all have doubts and be tested. We can’t sit far away in the distance and condemn others as if we are some kind of immune God- we are just as human as everyone else, and we need to foster compassion continually. “For with what judgment ye judge, ye shall be judged: and with what measure ye mete, it shall be measured to you again.” Matthew 7:2 (basically this whole chapter is golden on the subject).

I hope she understands the error in her actions, but more than that, I really hope that she learns from this. I also hope that all of these people leaving nasty, unforgettable, cutting comments don’t diminish her self-worth to the point of being unable to see her innate divine nature. She is more than one mistake, but if we keep telling her that that is all she is and all she will ever be, we will rob of her of the desire to be more. We will limit and ultimately condemn her. Yes, she absolutely could’ve reacted in a much better way, and yes, someone should be telling her that. But not with pitchforks and torches- with love and concern, with the voice of a friend, with understanding and love. Just because we seek justice for the son does not mean we have a right to treat a fellow child of God as the dust beneath our feet. I don’t know about you, but when I make any kind of mistake, I like to be loved anyway, and even encouraged. If I can’t extended that same compassion and forgiveness to a woman who hasn’t really wronged me personally in any way, how can I expect the same from those I personally may wrong or affect by my actions?

Patheos.com cited a quote from Jason F. Wright (whose post has since been taken down) saying, “I asked Alabbas what was going through his mind that night. “I’ve just been left at Bryce Canyon,” he laughed. “By my own family!”” Hemant Mehta, who wrote the post titled “This “Inspirational” Story About a Doubting Mormon is Horrific”, expressed dismay at the flippant attitudes. I’m a little bit embarrassed reading the comments, which are primarily from atheists. These really aren’t the kinds of attitudes I’d like people to have about a church I fully believe in. I know it hurts God to hear them say these things. I also know we aren’t perfect, but I wish there was some way I could clean the slate. That being said, I do also think these people are being extremely hard on her and the church as a whole. I guess this is another example of why we need to “be examples of the believers at all times” Timothy 4:12

In his article on This Week in Mormons, Joseph Peterson stated, “…my feelings are that this young man was abandoned, at least emotionally abandoned, a long time ago…”. This is absolutely how I feel. I’ve noticed that a lot of parents might be caring for their children physically and maybe even spiritually, but as a culture we have become increasingly unable to provide for the emotional needs each other. Citing a perfect example from my own life, I had expressed my feelings about my situation during my childhood to many adults, all of whom gave little heed to my concerns and even went so far as to tell me I was overreacting. This is NOT what Christ would have done or said. Now, I’m not condemning anyone for not hearing me out and this isn’t pity party for myself, but I would like to use this as warning sign. Can you see the decay in our ability to listen to others?

Peterson’s last point is titled “All Is Well And Zion Weeps”. I 100% feel this in my heart. We are so desperate to be perfectly righteous, to shun all that opposes our ideal, and we continue to tell ourselves that “all is well in Zion”. Things will never be well in Zion until we can face head on ours and the trials of others with the love, compassion, and understanding that the Savior had. Our need for sinless perfection is polluting our ability to practice true discipleship, and I know that this grieves our Father in Heaven. Progression cannot be obtained where fear and secrecy reside. Until we can be open and honest about our shortcomings and allow those around us to do the same, we will continue to suffer alone, and that is NOT Zion.